The Disaster Relief Motorcycle FleetComprising Doctors and Other Medical Workers:Saving many lives 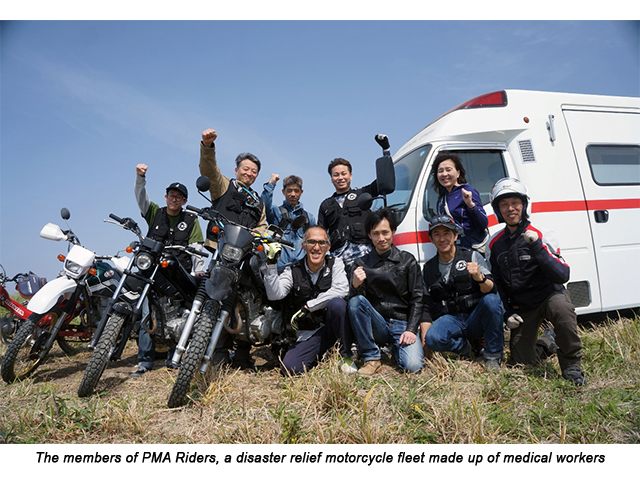 The doctors, nurses, and other medical workers at Shimada Municipal Hospital in Shimada City, Shizuoka Prefecture, have formed a volunteer disaster relief motorcycle fleet called “PMA Riders.”These medical workers themselves ride motorcycles and provide medical assistance in disaster areas that cannot be accessed by ambulances. The fleetis in the process of promoting their activities and calling on motorcycle-riding medical workers nationwide to participate. Here is a report on activity of PMA Riders’ training sessions, which took place on unused land near Mt. Fuji Shizuoka Airport.

When a natural disaster strikes and there is significant damage, then life-saving rescue operations can be required. In such situations, roads are frequently blocked by rubble, preventing numerous areas from being reached by standard emergency vehicles. If medical workers themselves can reach and treat the victims, morelives can be saved. It was this idea that inspired doctors, nurses, and other medical workers who love motorcycles to make a stand.

PMA Riders: a motorcycle fleet made up of medical workers

There is a group of doctors, nurses, and other medical workers who seek to provide life-saving and relief activities by accessing hard-to-reach disaster areas on motorcycles when a disastrous earthquake or another large-scale disaster occurs; now, they are inviting their colleagues all over Japan to join a network of such motorcycle fleets. Meet PMA Riders—which stands for Professional Medical Assistance Riders—a volunteer disaster relief motorcycle fleet led by Ichiro Nakayama, 57, a chief director of orthopedics at Shimada Municipal Hospital in Shimada City, Shizuoka Prefecture.

PMA Riders was established in September 2017. In addition to medical workers from Shimada Municipal Hospital, the fleet also comprises members from other prefectures, including Saitama, Mie, and Kyoto. There are 33 members in total—9 doctors, 22 nurses, 1 pharmacist, and 1 office worker—and every memberholds a motorcycle license. Their goal is to use the enhanced mobility of motorcycles to provide medical assistance in areas that are beyond the reach of ambulances.The author visited the fleet, having been informed that they weregoing to do training.

Rescue training in places that are hard for ambulances to reach

Thanks to the cooperation of a local motorcycle dealership, three off-road motorcycles were available for use at the training site, while a spare ambulance was borrowed from Shimada Municipal Hospital.

I rode the ambulance as it drove over the uneven ground, and it bumped and shook violently. There was a risk that it would become stuck and so, in the end, it was forced to turn back. 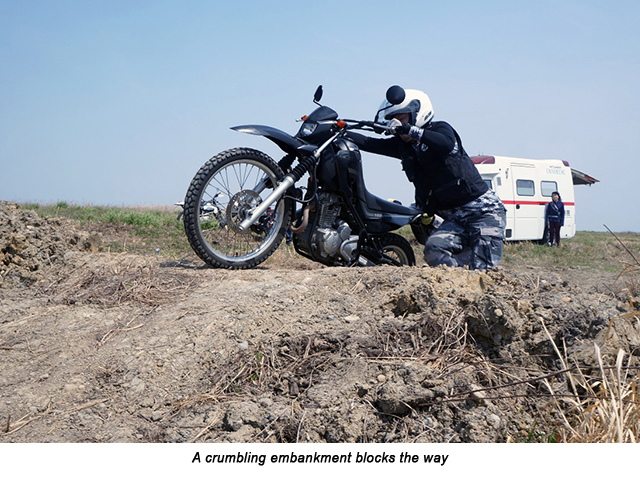 However, an injured woman lay stricken further ahead. Since the ambulance could not go on, four members of PMA Riders took two motorcycles in an effort to provide medical assistance. 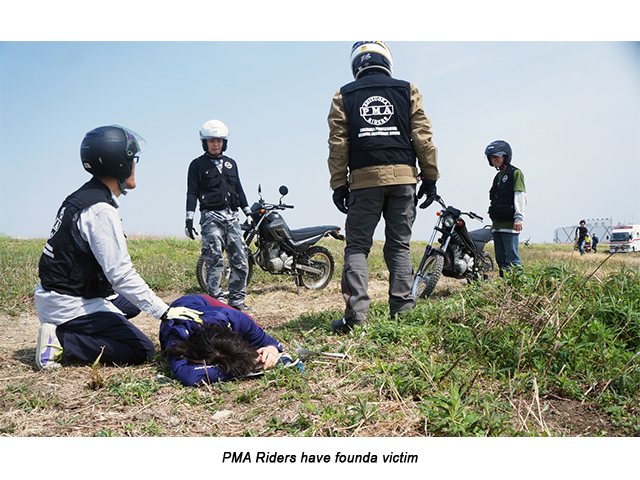 On the way, a crumbling embankment blocked the path of the motorcycles, but somehow the members overcame it and reached the injured woman. “Are you ok?” one of the nurses called out, before checking for signs of breathing. The doctor made an assessment of the victim’s condition andinstructed the group to carry her to the ambulance, using a collapsible stretcher they had taken with them. 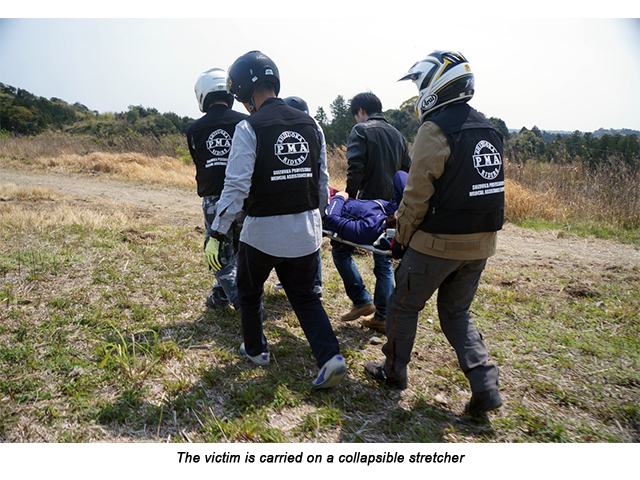 After transporting the victim to the ambulance, the members showed their thoughts: “Pushing the motorcycle over the embankment might look easy but, when I actually did it, the motorcyclefelt heavier than I had expected and it was difficult to control. It seems easier thatamember stabilizes the chassis,just holding the handlebar, andanothermemberpushes the tail part forward. There is no way of knowing what will happen at disaster sites, so it is important for us to accumulate experience in this way. We need to try out various things in anticipation of different conditions.” The training session had clearly highlighted the importance of learning on-site conditions. 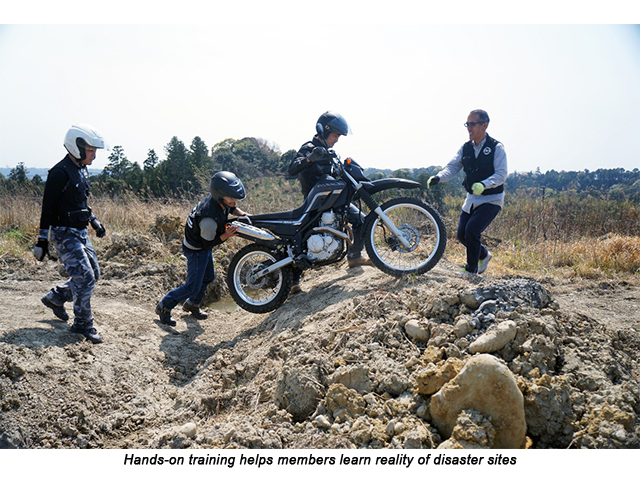 Dr. Nakayama said, “At present, we are a volunteer organization, so it is unlikely we would beneeded to provide emergency assistance in the direct aftermath of a disaster. Instead, we anticipate that afteragovernmental organizationhas commenced relief operations, the fire department might, for example, request us to work with their emergency service for relief and rescue tasks, and so our expertise as medical workers would be utilized. When there are reports of victims in critical condition, if doctors can themselves reach the victims by motorcycle, then they can provide swift and in-depth medical assistance with minimal loss of time. In the first two weeks after a disaster, I expect that there will be significant demand for such medical help.”

The amount of medical resources—both medical workers and medicines—at disaster sites is limited, and this makes triage* particularly important. By ensuring that doctors are actually on site, then medical resources can be distributed more effectively, so enabling the local situation to be better managed.

When the Great East Japan Earthquake struck, Dr. Nakayama worked as a doctor supporting affected areas, by staying at a hospital in Miyagi Prefecture. Dr. Nakayama said, “A natural disaster takes a large number of lives and destroys a large quantity of assets in one fell swoop. I asked myself: When faced with such horrors, what can I do? I love motorcycles, and I know how useful they can be; my aim is to combine my medical knowhow with the mobility of motorcycles, and make the best use of both.

Dr. Nakayama has been calling on doctors across Japan who either ride motorcycles or have ridden them in the past to join PMA Riders. If a major earthquake struck Shizuoka Prefecture, then PMA Riders from other prefectures would come to provide assistance; such a mutually beneficial network would be ideal.

Dr. Nakayama said, “We are just starting out. So, to begin with, I want to promote the goals of PMA Riders to as many people as possible and expand our network. In addition, I hope to establish a relationship of trust with governmental organizations, and lay the foundation for our activities—including how we can best work with these organizations in times of disaster.”

*Triage- refers to the process of prioritizing treatment, transportation, and destination according to the severity of the victims’ conditions, when there are multiple victims at disaster or accident sites. Triage is typically carried out by paramedics at disaster sites; however, if doctors are present, they assume responsibility for triage. 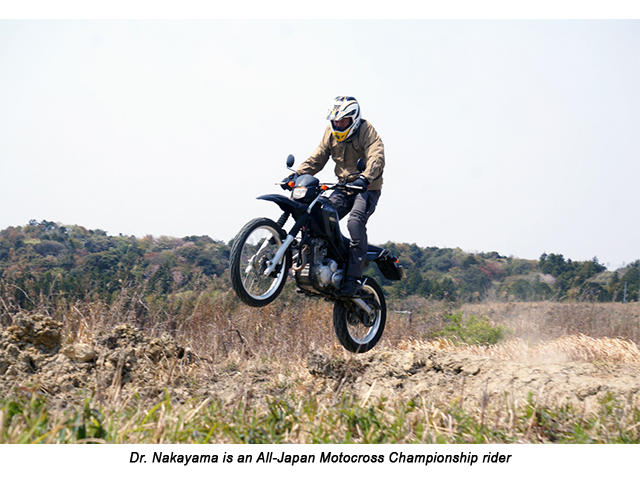 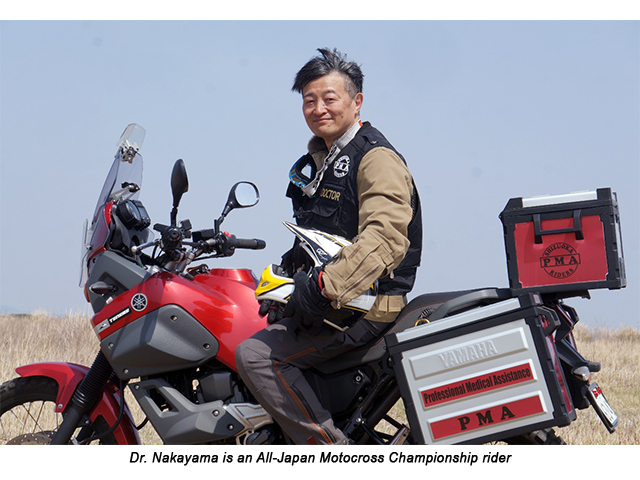 Hiroshige Suganuma, 54, is a pharmacist. He said, “In disaster areas,the transportation of medicines is critical. A motorcyclecan enter an isolated village and, in my case, I have a pharmaceutical license, so I can ensure the distribution of medicines goes smoothly.” Mr. Suganuma is also a qualified motorcycle mechanic and welder, meaning he can alsohelp repair machines in disaster sites. He followed, “One of my hobbies is customizing motorcycles, and eventually I hope to create an original motorcycle that is suited to disaster relief from both a functional and stylistic perspective. I want to continue these activities while enjoying such customization, and I would be delighted if we could gradually improve this training ground so thatyounger memberscan enjoy riding freely.” 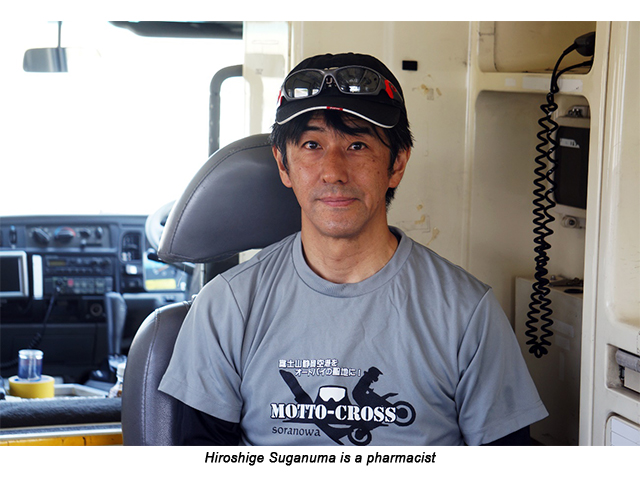 Searching for a way to connect with communities outside the hospital

Kazuya Yagi, 31, is a nurse. He relaxes on his holidays by taking trips on his motorcycle. He said, “When your job is related to medical care, the majority of my time ends up being focused around the hospital. I started participating in this activity because I wanted to connect withcommunitiesoutside the hospital. I had never considered that the motorcycle I usually ride could be of use in disaster areas, so I was curious to see how it might be used. Having joined in this training session, I am gradually getting a clearer picture.” 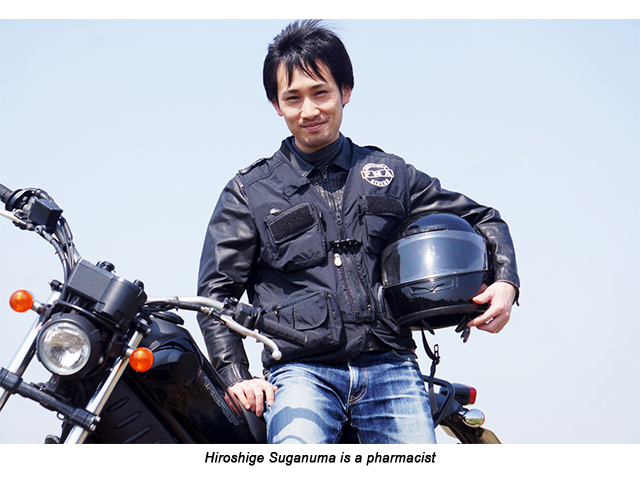 I asked him how he felt about training during his valuable free time. Mr. Yagi replied: “A disaster can strike whether it’s a holiday or not—as I understand that I have to be always ready, I don’t really mind. Through my interactions with Dr. Nakayama and the other members, I hope to find an answer to the question: What can Ido in the event of a major earthquake?”

Time with PMA Riders led to the following conclusion: they are a group of medical workers with wonderful visions.