“The 31st Thailand International Motor Expo 2014” to be a platform proclaiming unity and a bright future for the automotive industry in the region under the theme concept of “Moving Forward Together ASEAN Autos”. Car companies launched the latest models with best promotional offers of the year. Bustling auto market, car orders reaching 50,000 units and number of visitors exceeding 1.5 million can be expected. The Motor Expo ran from November 29 until December 10, 2014 at Impact Challenger 1-3, Muang Thong Thani.

On the total display area both inside and outside the halls of 85,000 sqm. visitors would see 41 brands of cars. Meanwhile at the motorbike zone this was the fourth year running that the organizer collaborated with MOTOCROSS Magazine Co., Ltd. in opening up space for big bike aficionados who could check out the 12 brands of prominent bikes, namely BMW, DUCATI, GPX, HONDA, KAWASAKI, KTM, MV AGUSTA, SUZUKI, TRIUMPH, UDA, YAMAHA and ZERO.

Mr. Kwanchai Prapaspong, “The 31st Thailand International Motor Expo” organizer revealed from the beginning of the year until the third quarter, the total sales volume has declined significantly. However, when it comes to the last quarter in the 31st Thailand International Motor Expo which is the best period of time activating the sales volume and making the total reservation of 42,254 cars from the 12 days event (The total reservation of Motor Expo 2013 was 41,083 cars) along with a huge number of visitors up to 1,384,182 visitors which increases from last year 1.2%, and making the cash flow about 52,000 million baht (including cars, big bikes, used cars, and related equipments).

Motorcycle is the largest automotive market of the country and it’s rising up continuously, particularly the premium motorcycles which reached a total reservation of 2,718 units increasing 29.4% comparing to the previous year, in Thailand International Motor Expo 2014. According to the sales annual report, the growth of overall premium motorcycle is revealed 21%, 15,000 units sold approximately this year, comparing to the same period of January to November last year. 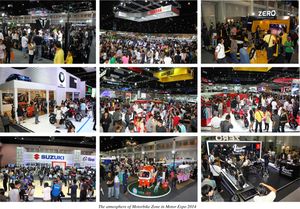