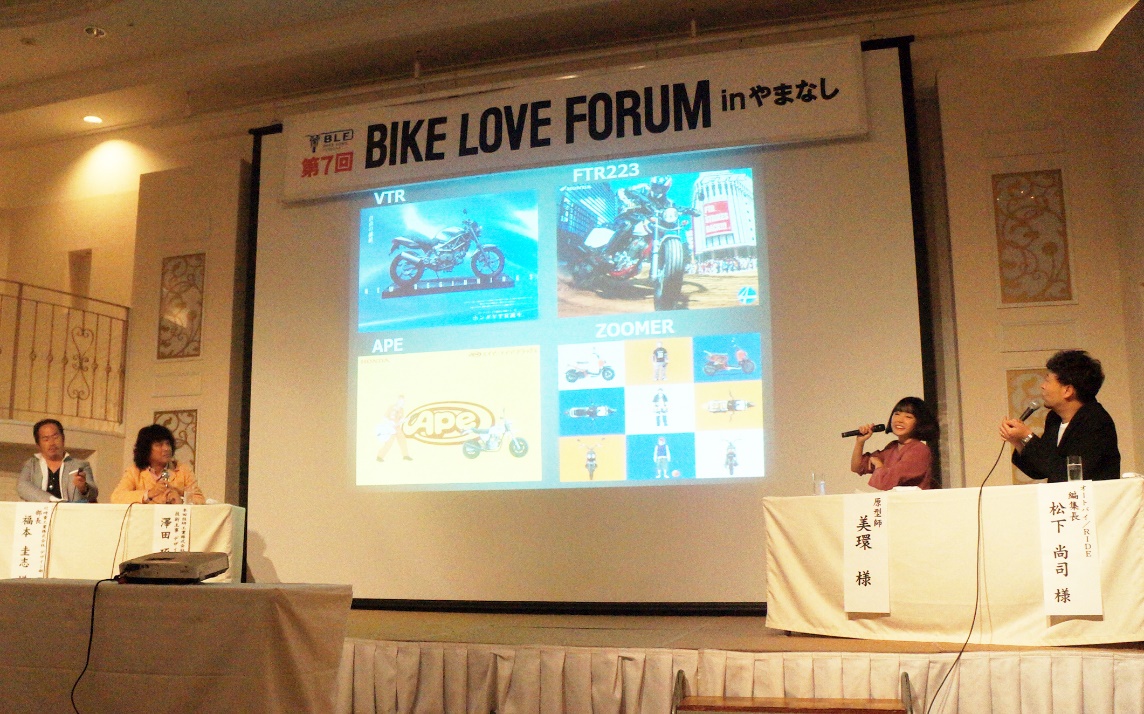 The BIKE LOVE FORUM in Yamanashi was held on September 20. The forum is held with the hope of promoting the motorcycle industry and developing motorcycle culture. This time, thoughtful discussions were held on methods of preventing motorcycle accidents and conducting safety training for young riders. In addition, discussions on the future directions of motorcycle styling designsand how to increase female riders also drew audience’s concern and interest.

The opening address was given by Futoshi Kono, Director of the METI Automobile Division. Kono said in his address, “The outlook for the global economy is unclear and uncertain, and the automobile industry is facing major changes such as CASE (connectivity, autonomous, sharing, and electrification) and MaaS (mobility as a service). I would liketo see the motorcycle industry to strategically enhance its competitiveness and lead markets in Japan and overseas.” The next to speak was Yamanashi Prefecture Governor KotaroNagasaki, who said, “Yamanashi recently issued a Wine Prefecture Declaration. Yamanashi also boasts high production of mineral water and delicious sake. We welcome visitors who travel throughout the prefecture by motorcycle, spenda night, and enjoy our hot springs, sake, and food,” emphasizing the appeals of the prefecture.

This was followed by an explanation by Deputy Director Takahiro Naito of the METI Automobile Division on the progress of the motorcycle industry policy roadmap** being created by the BLF. He reported on the results achieved through measures in recent years.

** A strategic plan consisting of actionplans (13 for overseas and 14 for Japan) to address policy issues concerning motorcycles (4 overseas and 5 in Japan).

The topic of the first panel discussion was “fun and safe riding in Yamanashi.”In the first half, Deputy DirectorKatsunori Maeno presented examples of traffic safety measures in Yamanashi Prefecture. They discussed the focused implementation to draw touring riders’ attention to safety, when they pass on National Highway No. 413, commonly known as“Doshi-Michi“.Deputy Director Maeno also pointed out thatYamanashi is one of the highest prefectures in the country, in the ownership ratio of moped by high school students, and so it is important to enhance safe riding education.

Next, Deputy Director Yoichi Nakamuraintroduced“the Safe Riding Yamanashi Touring Campaign”, a BLF-related eventthat was to be offered from this day through November 30. He called on riders to participate in a stamp rally and safely enjoy touring in the prefectureand to broadly publicize their favorite tourism spots.

In the second half, Assistant Professor Inagaki served as the chair and led a discussion for safety by dividing the issues into those for touring and others for daily commuting like riding a moped.

Kazu Nakanishi, who has been working in safety campaign on the Izu Skyline and in other areas for 10 years, noted that “riders in their 40s and 50s are involved in many accidents while touring.It is not safe enough even if you are careful only of yourself, andself-restraint by paying attention to one surroundings is also important.”Haruhiko Tsuruda, who has been a driving safety instructor for 27 years, said, “I want riders to improve skills by participating in safety seminars and turn them into feelings of relaxation.” In contrast, Hiroki Sakuta focused on mopeds and showed the example of Saitama Prefecture, which has repealed the prohibition of riding motorcycles by high school students. He stated, “There are no longer students who ride in secret, and it is now possible to conduct safety training in a more open way.”Tomoyuki Inagaki closedthe discussion by noting that Olympic and Paralympic icicle [cycling] races will take place on “Doshi-Michi” and expressing his hope thatthe high morals of riderscan be conveyed from Yamanashi to the world by eliminating accidents on “Doshi-Michi.”

A discussion with plenty of laughter was held with HisashiMatsushita serving as moderator.Takuma Sawada discussed the role of the designer, saying, “Motorcycle styling design does not simply mean drawing a styling sketch, butalso realizing a design concept, “what should it be ?”

Keishi Fukumoto said, “European manufacturers have long had brand strength and have been particular about high-quality styling designs. It will be important for each Japanese manufacturersfrom now to be more conscious of its own brand in developingstyling designs.”

Mikan commented, “I first rode a motorcycle due to influences from manga and anime.I desire to have a stylish bike produced, that would appeal to the subculture.” Matsushita noted, “New styling designs can be created only from new stories (values). This was well understood during the discussion.”

The second panel discussion moderated by YumikoKawasaki, was on the topicsof how to increasefemale riders and requests to the industry. An exchange of frank opinions took place.

To begin, Kawasaki introduced the history offemale riders in Japan from the 1970s to the current day.She discussed changes in apparel, changes in group activities, and other issues.

Next, the participants exchangedopinions on how to increasefemale riders.Yuko Matsuzaki, who has extensive riding experiences,made an appeal to the forum, “If the number of women working in the motorcycle industry can be increased by making working environments more amenable to women, I believe that the number of female riders will steadily increase.”

Tomoko Yamane, anentry-level rider, said, “I am small in stature, and as a result, the bike is unstable when I’m standing. The other day, I fell overmy bike.” Yuka Shibuya added, “The seat height is important for foot-reachability. When buying a new bike, I would be pleased if the height of the seat can be customized.”Ikumi Otagiri, who does not ride, conveyed the following impression: “Having heard various comments, now I feel that if women are convinced that they can ride safely, more women will become riders.”

Conclusion: Osaka Prefectureselected as the host for the next forum

To endthe program, Yoshihiro Hidaka, chairman of the Motorcycle Committee of Japan Automobile Manufacturers Association, summed up the proceedings: “I would like to see adult riders become attractive examples and more broadly convey bike safety and good behaviors to young riders. I would like to call on governmental bodies to conduct safety education for high school students. Brand principles and philosophy will be crucial to motorcycle styling designs in the future. For femaleriders, we have recognized that the seat height for better foot-reachability is the subject to be solved for women.”He indicated that the BLF will become even more active in the future to address these issues. 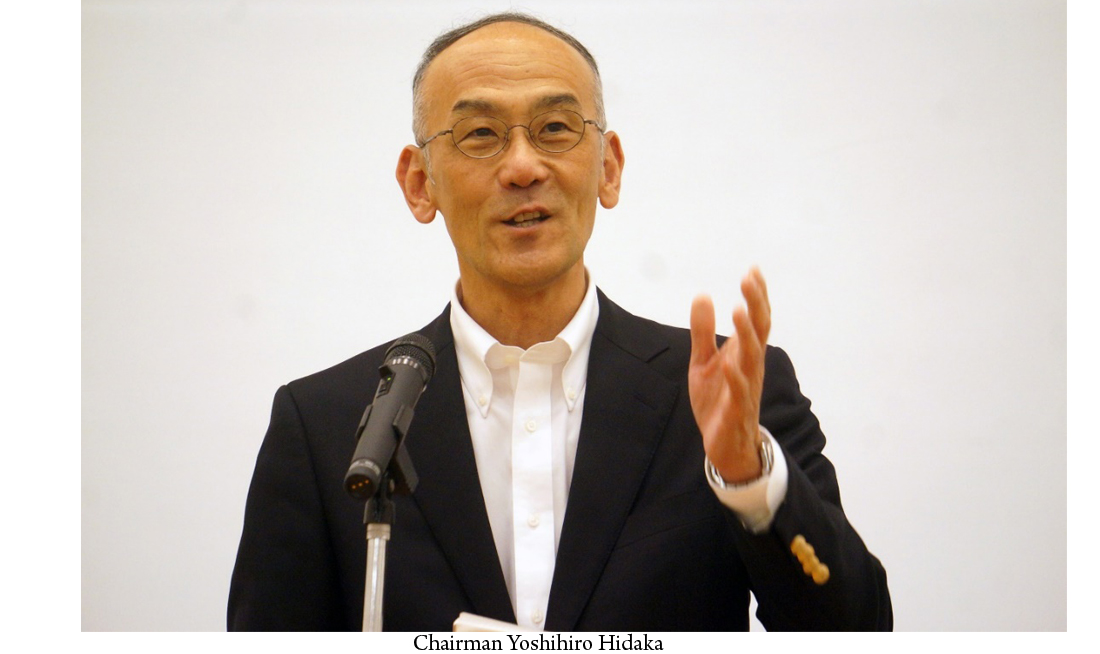 Chairman Naoyuki Omura of the All-Japan Motorcycle Cooperatives Federation closed the forum with a comment, “Much more discussion will be needed to invigorate the motorcycle market. We would try to gain further results in Osaka.”