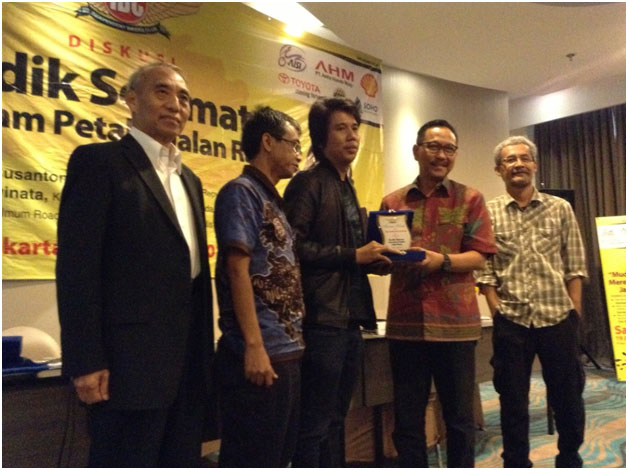 Indonesian Motorcycles Industry Association (AISI) has continuous efforts to create the convenient traffic conditions and ensure the safety of all road users. One of the efforts is actively involved in seminar "Annual Eid-Movements Safety, Reducing Road Accidents" held by the Independent Bikers Club (IBC) in Jakarta, Saturday (19/7).

Indonesian Motorcycles Industry Association (AISI) has continuous efforts to create the convenient traffic conditions and ensure the safety of all road users. One of the efforts is actively involved in seminar "Annual Eid-Movements Safety, Reducing Road Accidents" held by the Independent Bikers Club (IBC) in Jakarta, Saturday (19/7).

The event was held in conjunction with the massive migration of people (“mudik” in bahasa Indonesia), which occurred when most of the people returned to their respective hometowns. Many use their personal vehicles thus increasing the risk for accidents to take place. "The motorists should remain alert for “mudik”, especially of their security and safety. The travelers usually dominated by motorcycle riders, given the benefit of lower cost," said Deputy Minister of Transportation Dr. Ir. Bambang Susantono, MCE., one of the presenter that night.

Specifically, he highlighted the past data of annual Eid-movements in 2013, the D-7, D1, D2, and D+7 or in 16 days, motorcycle involvement in accidents recorded 76% of the total accidents. That figure were equivalent to 163 cases per day, while the death toll from the motorcyclists reached about 21 people per day. Surely this is not the responsibility of the government alone, but all of the road-safety stakeholders must form a synergy to overcome the "Annual Eid-movements" phenomenon.

It is well acknowledged by AISI, through its chairman, Dr. Ing. Gunadi Sindhuwinata whom later described many activities that have been and will be carried out in order to support Annual Eid-movements. "There are many factors, such as inadequate public transportation, so people still prefer their two-wheeled vehicles as means to return to their hometowns. Moreover, there are some people who have notion that motorcycles are considered as gifts for their extended families," he said.

Furthermore Mr. Sindhuwinata explained, the role of the manufacturers are not solely executed during Eid, but has been carried out regularly. The steps are performed by AISI for examples are international collaborations for the improvement of road safety with several global institutions such as FAMI.

AISI also launched HHRT initiatives which involved the use of helmet, head lights on, road surface, and training, in order to improve the safety of the motorcyclists. Furthermore, the gentleman that have educational background in Germany emphasized on rigorous technical testing imposed by AISI on motorcycle to be marketed, in the form of laboratory exhaust emissions tests, noise testing, acceleration tests, and idle tests.

AISI members also held a more decent “Mudik” supports through the provision of facilities for the customers. Respectively, people could signed up to participate in the "Going Hometown" programs, that enabled them to have their motorcycles transported by trucks and they plus family members boarded to designated buses that had been prepared. For example, Honda were organized services for 1,200 people and 2,400 units of motorcycles for travelers headed to Semarang and Yogyakarta.

In addition, AISI members also set up well-situated “Rest Areas” for other travelers along their routes. Motorcycle riders could took a break at the designated rest area every 2-3 hours of riding. Those rest area also attended by experienced mechanics who were stand by to help if problems occur on their motorcycle.

Edo Rusyanto, the Chairman of the Road Safety Association (RSA), underlined that stake-holders must also put emphasis not only people outflow, but also the inflow from their hometowns; when people traveled back to the city. "Understandably, approximately 44% of accidents occur during the period of Eid inflow, the utmost of total people movements. Inflow accounted for 42% of total travels," said the man who were also representative of the motorcyclist community.

With the attention of the stake holders, the Annual Eid-movements were expected to be more safety and convenient.