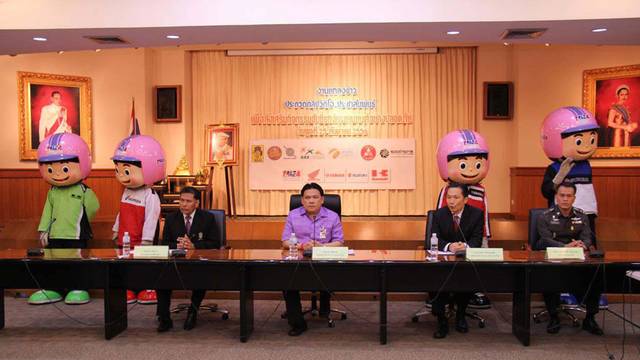 Thai Motorcycle Enterprise Association (TMEA) by Mr. Phongstorn Ermongkonchai, President of TMEA together with the management representatives of the Disaster Prevention and Mitigation Department – Ministry of Interior, Ministry of Education, and Royal Thai Police announced the “Road Safety Video Clip Contest 2013” with the objective to promote safety awareness among young motorcycle riders.

Phongstorn has disclosed at the press conference that the Thai Motorcycle Enterprise Association was founded as non-profit organization by the major motorcycle manufacturers in Thailand, namely, Thai Yamaha Motor Co., Ltd., A.P. Honda Co., Ltd., Thai Suzuki Motor Co., Ltd., and Kawazaki Motor Co., Ltd. One of the main purposes of the Association is to organize activities to promote safety of motorcycle riding among youth and public. The latest activity is “Road Safety VDO Clip Contest 2013”. This is the campaign to promote safe motorcycle riding awareness by inviting students, and public to create VDO clip with length not more than 90 seconds under the concept to promote motorcycle riders to be more conscious on safety riding. The total prizes from this contest values 200,000 baht and prestigious trophy from Ministries.

In the past, TMEA has been continuously successful in arranging promotion activities on safe motorcycle riding. For instance, photo contest under the concept of safe motorcycle riding by TMEA a couple of years ago could successfully get attention of the public, and a large number of nominations. This year’s VDO clip contest is to enhance the promotion from the past activities.

Categories and prizes of the contest are divided as follow: