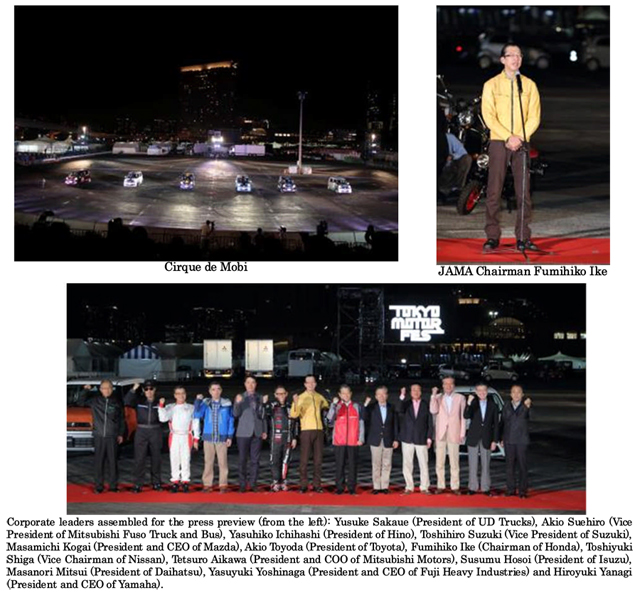 The Japan Automobile Manufacturers Association (JAMA) staged “Tokyo Motor Festival 2014” on October 11 and 12 at Tokyo Water Front City in the Koto Ward district of Tokyo 1. A special press preview of the grounds was held the day before the official opening, which included a special performance of the automobile acrobatic circus “Cirque de Mobi.” Following this acrobatic exhibition was the entrance of top executives from JAMA member motorcycle and automobile manufacturers. Each one was driving a vehicle built by their own respective companies, while going on to deliver greetings to the assembled crowd.

Appearing astride a motorcycle was JAMA Chairman Fumihiko Ike (Chairman and Representative Director of Honda Motor Co., Ltd.). In his address, Mr. Ike offered the following thoughts: “Japan’s auto mobile manufacturers, who normally engage in fierce competition, have united in the quest to invigorate the nation in the aftermath of the Great East Japan Earthquake and Tsunami of March 2011. As one phase of that initiative, we want to take advantage the current year, in which the Tokyo Motor Show is not being held, to use Tokyo Motor Festival 2014 to bring visitors into direct contact with the unlimited joys of motorcycles and cars.”

The opening ceremony was held on October 11, with Her Imperial Highness Princess Yoko of Mikasa also in attendance. Taking the stage was JAMA Chairman Ike, who went on record with the goal of Tokyo Motor Festival 2014: “We want to create just as many car and motorcycle fans as possible.” Toward that end, he explained how the event had not been organized with the concept of providing a one-sided flow of information from the sponsor side. Rather, he described the keynote theme of having visitors “Actually ride, touch and look at” the motorcycles and cars on display, while providing a number of participation-format attractions to generate a sense of unity with the manufacturers.

For motorcycles, the “Family Motorbike Corner” was sponsored as a hands-on workshop attraction, targeting elementary school age children and their parents or other guardians. Here, the youngsters were able to ride mini-sized motorcycles developed exclusively for kids, joining with the adults to learn the ropes of operating the machines following the guidance of instructors. At the end of their training, the children were able to operate the motorbikes on their own.

While these downsized motorcycles were expressly built with children in mind, each was propelled by one full horsepower, kick started to get going and gear shifted by foot. As a result, while the pint sized riders were able to fully savor the fun of motorcycling, the complicated operation also posed its fair share of challenges on the course. In view of that, helmets and protectors were provided for the kids to wear, with a lecture on motorbike basics and warming-up calisthenics required before the actual workshop. In addition, guardians joined the kids astride the motorbikes for repeated drills in how to start out, stay on the road and come to a stop. Only after getting these techniques down were the child riders allowed to take to the course on their own. 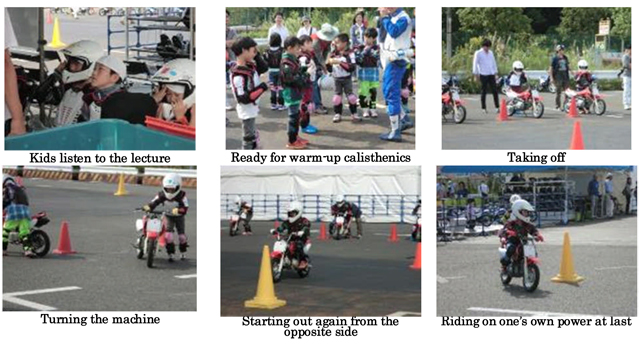 One of the workshop operators offered the following insight: “Our goal is to use such opportunities to foster keener interest in motorbikes on the part of both parents and children, raising the desires by youngsters to take part in motor sports in the future.”

Another technical attraction provided on-site was the “Service Engineer Corner.” Here, children were invited to try their hands at dismantling and reassembling engines. They donned hats, goggles, raincoats and gloves, and were then coached by professional service engineers in helping them learn the ropes. Those taking part were clearly fascinated by seeing the inner workings of the 4-cycle engines for the very first time, with their expressions turning dead serious by anyone’s standards.

The “Sensation and Experience Corner” was designed to encourage visitors to connect with the joys of motorcycles through riding, touching and looking. In addition to test rides of mopeds (motorized bicycles with displacement of under 50cc), riding instructions were also provided for those with no previous experience in using such motorbikes.

Presented in this space was a “motorcycle trials” stage – used to show off maneuvers not normally seen on roads or other public facilities. Spectators shouted and cheered at the dazzling riding techniques showcased, earning enthusiastic rounds of applause again and again.

Displays of motorcycle models were located throughout the festival grounds. Families, couples, groups of friends and other visitors were able to climb aboard their machines of choice to experience the real feel of sitting in the rider’s seat. 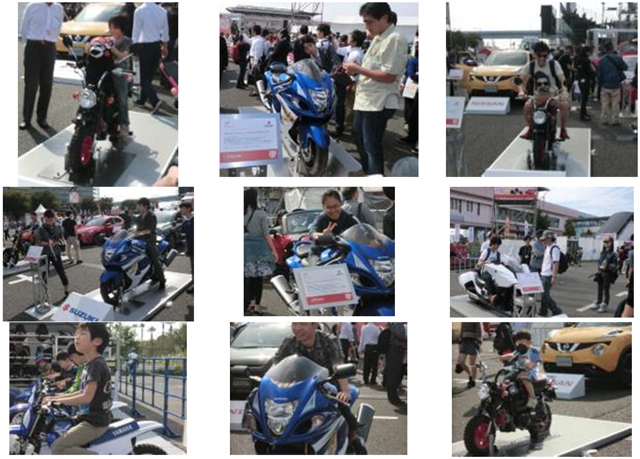 The event was packed with fun and interest for adults and kids alike, as well as those with little knowledge or contact with motorcycles. The gate over the two-day period came to 68,752 visitors. Staged with the passionate desire to grow the ranks of motorcycle enthusiasts whenever possible, Tokyo Motor Festival 2014 turned out to be a big success. 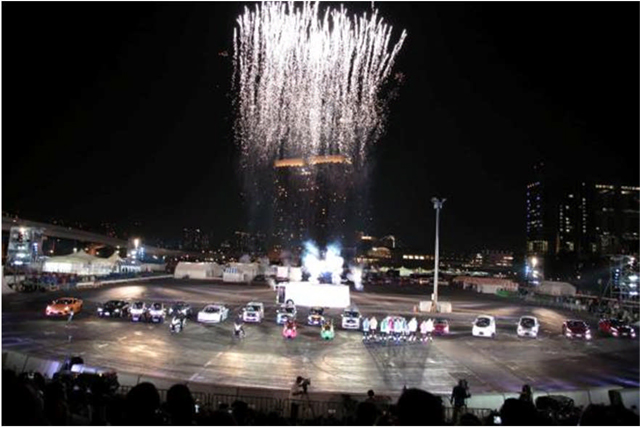 1Although the festival was originally planned as a 3-day event to last through October 13 (Monday and a national holiday), the Monday schedule was cancelled due to a typhoon.